Hit enter to search or ESC to close

Come and join us here in rural Tuscany where our picturesque getaway awaits you. 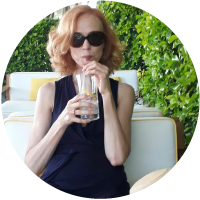 English born but with a life-long fondness for Italy and all things Italian (well, given a couple of exceptions…) Kathryn first moved to Italy at just 18 after plotting her escape for several years:

My first truly lazy, wonderful summer was spent in the charming hill-top town of Osimo and on the nearby beaches in Le Marche before moving to what turned out to be a long-term stay in Rome as summer drew to a close.

During these years the world opened up to me. In Italy I discovered good food – who knew that vegetables could be tasty? – wine, culture, love, music and, of course, I grew up. I also grew hips, rather rapidly, but not surprisingly given my new-found appetite for food coupled with the cooks’ delight in feeding me up. It was the 80’s and 90’s and the economic climate in Italy was immensely positive and it was a wonderful time to be English mother-tongue as opportunities which I could never have dreamt of in England came my way.

For some obscure reason, some 14 years later, I found myself returning to live in England but knew from the very first day back there that it was a mistake. I have yearned ever since to move back to Italy but could not envisage how on earth that would happen. I had my sights set on Tuscany for a calmer pace of life, but certainly did not have the money needed to buy one of the many beautiful properties on the market and I feared it would forever be a pipe-dream.

My epiphany came one day when, finally tackling the pile of ironing, of all things, I watched yet another ‘moving abroad’ programme on daytime tv. The young couple were looking at properties in Tuscany, and although I didn’t recognise any of the place names, I was mighty impressed with the standard and size of house given their moderate budget. Shortly afterwards I was at a property show sponsored by the same TV programme and that’s when I discovered Lunigiana, this beautiful, verdant area of northern Tuscany. Even though I had lived in Italy for all those years and visited Tuscany many times, I had never heard of Lunigiana. What a wonderful hidden gem!! For me Lunigiana is a little more like the Italy I first fell in love with on my first trip abroad aged 12. Rome and the cities have become so touristy now, so homogenised as large cities now are, but Lunigiana feels like the soul of Italy, the unspoiled Italy and the simple Italy.

Life here still revolves around the seasons. Bountiful summer crops are preserved. As soon as summer draws to a close we collect wood to heat the chilly winter nights. As soon as the days become longer planting for the next summer crops takes place. Everything has a time and a reason. It’s a return to nature.

My wish is to return what remains of the Francini estate, a mere 2 acres now, into productive land, sustainably farmed along the principles of permaculture, which is simply what would have been practised here centuries ago, but without it being labelled. I envisage a small orchard and a vegetable plot along with some chickens to scratch around under my existing hazelnut tree.

Now taking bookings for May 2019 onwards Make your reservation today!

Find us on Google